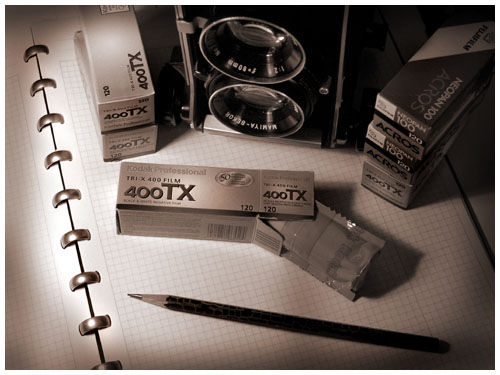 The architecture and street photographs are taken using Kodak Tri-X 400. In its original form this film was popular with photojournalists, performing well at 1600 ASA or higher speeds, and although it has changed slightly over the years it still exhibits these properties. Most of these pictures were taken at 800 ASA which enables hand held shots to be taken at relatively low light levels. Using a standard lens (80mm) and waist-level finder, speeds of 1/60th or even 1/30th are easily kept sharp (especially when using the Rolleiflex or Mamiya TLRs). Low light level street shots are typically 1/60th at F8.

The film is loaded in a changing bag into a spiral tank and developed in Kodak HC-110 dilution B. Typical development times are 4½ minutes at 21 degrees C.

The negatives are scanned on a flatbed scanner (CanoScan D2400U) and minimal manipulation carried out in Photoshop Elements. This is typically dodging and burning as one would carry out in a darkroom. Occasionally Photoshop is also used to correct converging vertical lines in wide-angle shots. Images are converted to RGB and “toned” using hue/saturation adjustments.

Despite the high speed, the medium format negative size results in an small size of grain which is particularly attractive in street and building photographs.

Most of the portrait shots are on Fuji Neopan 100 Acros which has a fine grain size and produces sharp images with a good tonal range.

The resulting digital images are large – a 25MB PSD file when the negative is scanned at 2400 dpi – and the quality is easily good enough for A3+ size prints.